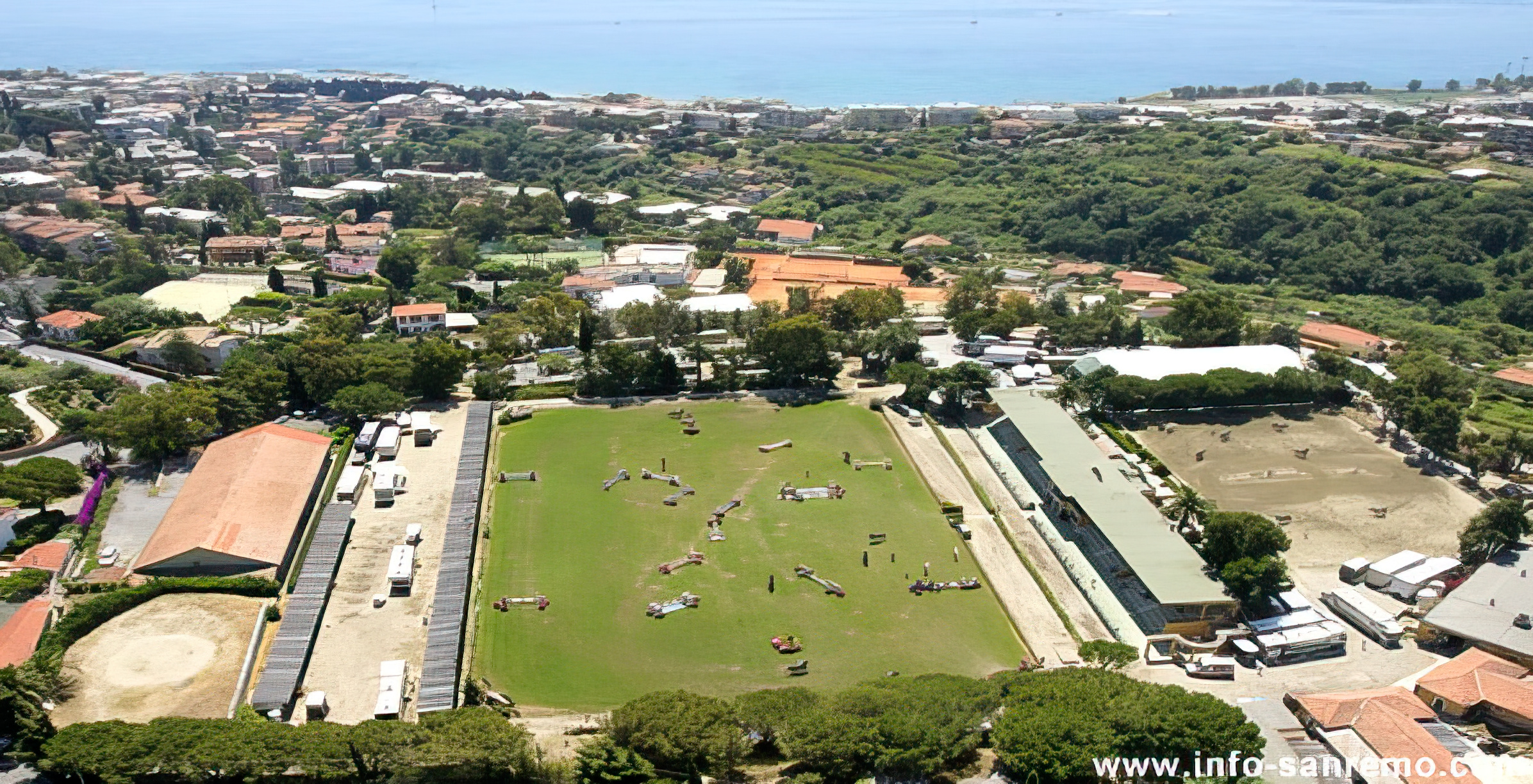 The San Remo Equestrian Field is our city’s field dedicated to sport and recreational riding. The San Remo Equestrian Society, along with Circolo Golf degli Ulivi, is the oldest and most prestigious sports institution in our city and one of the symbols of sports on the Flower Riviera. In 1927 engineer Pietro Agosti became the first mayor of San Remo: we are in the Fascist twenty-year period, and the so-called fascistissime laws of ’25-’26 established the new office of the mayor, in which all the powers and functions of the mayor, the council and the city council converged. The same year, the engineer applied for and obtained from the government a final license for the gambling of the Casino di Sanremo and agreed with the Casino’s board that a portion of the proceeds obtained from the activity would go into a municipal fund in favor of the San Remo community, which would be used to carry out works of public interest in our city. Engineer Agosti used that money to put into practice the largest program of public works that San Remo knew: part of that project was also the construction, agreed upon with the concessionary company of the Casino, of a sports field dedicated to horseback riding, shooting and possible other sports, to be carved out on a municipally owned land of about 36,000 square meters located in the Solaro region. Numerous notable personalities including distinguished knights, figures from Ligurian high society, the representatives of six nations and even King Victor Emmanuel III as the event’s godfather were present at the competition held to mark the inauguration of the field on February 1, 1930. In 1933, the same year in which the prestigious San Remo Symphony Orchestra was founded, the construction of the Equestrian Field was completed by the Odorico company of Milan and the San Remo City Council represented by Podestà Giovanni Guidi. As was the case throughout the Riviera dei Fiori, the Horse Camp came out deeply damaged by the bombings of World War II, and after the end of the conflict the facilities were used as a refugee camp for evacuees fleeing war-torn areas. Years later the municipality took it upon itself to renovate the entire complex although in 1980 it decided to deprive the club of the indoor track premises in order to use them for a boxing and martial arts gymnasium. Over the years, the two historic presidents of the club, Professor Cavalli – nomen omen! – from 1962 to 1987 and lawyer Vanni Zunino from 1987 to 2003. But the prestige that resides in the Club also comes from the internationally prominent personalities who have competed or simply ridden here in the saddle of their splendid animals: we speak, for example, of Marshal Veronesi, from the illustrious Pinerolo Cavalry School, who was moreover for a long time a riding instructor at the school of the San Remo Equestrian Camp, of Colonels Raimondo and Piero D’Inzeo, the celebrated invincible brothers of Italian horsemanship, winners of several medals at the Olympics and world championships, and the great Graziano Mancinelli, at the time named The quintessential Cavaliere, Italian champion of the 1960s and 1970s. The location in which the Equestrian Field is situated, a flat area on the back of a hill behind San Remo, overlooking the splendid Ligurian Sea, and the structure of the Center, one of the most complete in Europe for elegance, seriousness, convenience and comfort, make the San Remo Equestrian Club a place more unique than rare. At the entrance, a large tree-lined avenue flanked by palm trees leads to the main building, a two-story structure that houses recreational spaces on the first floor and the grandstands on the second floor, capable of seating more than 1,500 people, overlooking the large main grass competition field measuring 120 meters by 80. In the center, a semicircular central forepart houses the royal grandstand flanked by two other grandstands reserved for dignitaries and prestigious guests. The whole is covered by a solid concrete canopy more than 15 meters deep. The main field is used only during competitions and is surrounded by a sand track for galloping and flanked by a space, also sand, for training. On the other side of the grandstands is another large sand practice field used for daily training, and the Center houses several other facilities, including an indoor space used in case of bad weather-an eventuality that occurs, however, rarely, thanks to the riparian climate that often gives sunny days ideal for outdoor practice-peaceful and relaxing spaces, surrounded by greenery, for visitors, the bar, restaurant, locker rooms, secretary’s office and rooms intended for common use. There are also 80 horse stalls, each of the area of 3 meters by 3 and a half meters, capable of accommodating as many horses, and designed specifically for the comfort and convenience of the animals. The pits are grouped in different pavilions, each equipped with its own saddlery with a thermal system designed to maintain a constant temperature inside and allow optimal storage of the materials deposited. 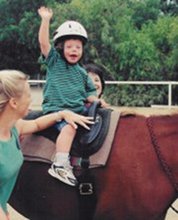 In short, a state-of-the-art facility designed to meet not only the needs of professional riders, but also those of those who may have just entered the world of equestrianism and those who decide to practice the magnificent discipline of horseback riding as a hobby or for therapeutic purposes.

You read that right, therapeutic. In fact, the San Remo Equestrian Society has for several years now been practicing hippotherapy, an effective method of treatment used since ancient times against diseases and disorders such as insomnia, epilepsy and forms of paralysis, unfortunately officially recognized as valid by medical science only after the end of World War II, but now practiced regularly in at least 30 countries around the World.

About ten differently abled boys from the class of the Aicardi Institute in San Remo, aged 15 to 22, have been continuously attending hippotherapy sessions organized by the Equestrian Society in cooperation with specialized FISE instructors for a long time, with decidedly satisfactory results. Therapeutic activities are usually conducted over a period of about an hour and a half, and involve simple riding exercises alternating with curative treatments based on approaching and developing a relationship of confidence with the animal.

Therapy activities coordinated by the San Remo Equestrian Society are joined by those of the AMAPEI Association of the Principality of Monaco, dedicated to the care of mentally disabled people of all ages, run by psychologist Yann Ballestra, who specializes in hippotherapy. The psychologist accompanies 6 people aged 18 to 54 with mental retardation to the facility once a week to follow them on their treatment journey.

The Club also has a Federal Riding School, approved and affiliated with FISE(Italian Equestrian Sports Federation) and led by qualified and capable professional instructors. The school includes many promising young riders, to whom the Society provides a substantial number of horses and ponies for beginners and younger riders. The school, open Tuesday through Sunday from 8:30 a.m. to noon and 2:30 p.m. to 6:30 p.m., moreover, offers a free first lesson to those who would like to try the discipline of horseback riding without immediate commitment. 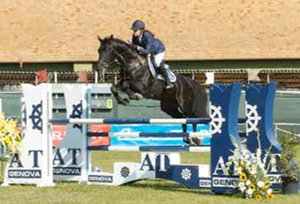 Trained and competition-ready riders always come out of this school. It is an honor for the society to be able to have names such as Rafael Amaral Rodrigues, Alessia Adené, Maddalena Valenzano Menada, Edoardo Biancheri, Giulia Alessi, Luis Antonio Neves and many others on its competitive equestrian team. Leading these athletes, moreover, is one of the greatest Brazilian equestrian champions of recent years, Luis Felipe De Azevedo, winner of two bronze medals at the 1996 Atlanta and Sydney 2000 Olympics in team show jumping, as well as holder of many individual Grand Prix victories. The team also includes his son Luis Felipe de Azevedo Filho (his name is exactly the same!) and his daughter Celine S. De Azevedo.

Every year this team takes part in competitions held on the San Remo Equestrian Course. At least three events are part of the annual calendar: the first takes place in June, and is the International Jumping Competition (ISC ) a star; in July, however, the National Four-Star Jumping Competition, a prestigious competition in which important and renowned Italian riders take part accompanied by a host of fans and enthusiasts of the sport.

But the most important and eagerly awaited event is certainly the International Jumping Competition a star called Derby dei Fiori, capable of attracting more than 4,000 people to the San Remo Equestrian Center during the long mid-October weekend in which it takes place. Our Italian riders, on this occasion, challenge great champions from Switzerland, France, Sweden, Austria, Belgium, Germany, Brazil and many other countries of the World. The event, revived in 2006 thanks to the efforts of Circolo president Maria Grazia Valenzano Menada after a few editions held in the 1980s, sees more than 250 horses and 150 riders compete on the Circolo’s beautiful grass field. The event is gradually attracting the interest of the media and television platforms, and every year the event is broadcast on SKY Channel 221 by the cameras of Class Horse TV.

In addition to these competitions, the Club organizes (and has organized) other important events outside the fixed calendar. In fact, the rapid and great development undergone by the club during the 1980s prompted the organizers of the European Young Riders Championship to hold the 1992 edition here at the San Remo Riding Course.